You are here: Home / Social Awareness / Remembering The RMS Titanic

In Titanic Revisited, we made a comparison of the real-life characters with the reel characters. This time, we’ll uncover the events surrounding the final moments of the RMS Titanic, as recounted by Discovery Channel.

On that fateful day of April 14, 1912, the Titanic had been receiving wireless messages all day, warnings of floating icebergs. Various other ocean liners brought the same message, but not all of these were relayed to the bridge. At around 9 p.m., Captain Smith, before retiring to his cabin for the night, conferred with his second officer reminding him that on such a clear, moonless night, it was extremely painstaking to spot icebergs. 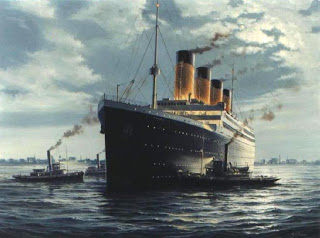 Why the Titanic never changed course despite the warnings is still a mystery. Perhaps it was hell-bent on making its way to its destination as quickly as possible, that being its maiden voyage. Further, there weren’t any icebergs spotted so far.

The final hours of the Titanic
At around 9:40 p.m., more warnings were received. These, however, were not passed on to the officers. The wireless operators had their hands full. Throughout the day, a good number of private telegrams had accumulated. As a matter of fact, the operator who received the last warning had been irked by the interruption.

The officers themselves, it seemed, did not have much experience dealing with icebergs as they simply contented themselves with information fed to them from the crow’s nest. As it turned out, the lookout didn’t even have a pair of binoculars. These, according to reports, had been misplaced.

At 11:40 p.m., the lookouts shouted an alarming “Iceberg right ahead!” Officer Murdoch, having very little time to react, decided to stop the ship immediately and reverse at full power. A frontal collision was prevented, but as it was impossible to stop the ship completely, the bow collided with the iceberg.

Analysts later decided it would have been best to steer into the iceberg directly. Although the bow would have been damaged, the likelihood the ship wouldn’t have sunk was greater, perhaps sparing the more than 1,500 lives that perished in the tragedy.

At first, it was thought they had made a lucky escape, but the effect of the collision was greatly felt down below. The engineers and firemen heard a loud bang and great waves of water gushed in. Immediately, order was given to seal the hatches and cut off air flow to the furnaces. Twenty minutes later, when Captain Smith and the master shipbuilder investigated, the mail room was already flooded.

Why the Titanic was doomed to sink
The ship’s hull was divided into fifteen watertight compartments. Five of them had been damaged, and as Mr. Andrews so emphatically stressed in the movie, had only four been damaged, the ship would have managed to stay afloat. Titanic was, needless to say, doomed to sink to the bottom of the ocean in an hour at the most.

Wasting no time, Captain Smith gave orders to send out an SOS and uncover the lifeboats. In his heart, he knew, at least 1,000 people would have to remain on board. The lifeboats the steamboat carried were not enough for everyone. When the distress rockets were fired a little after 12:15 a.m., many were already waiting on the deck with life jackets.

Instructions to the lifeboats were clear and concise – women and children first. At around 12:25 a.m., the first lifeboat was launched. It only held 28 first-class passengers as opposed to the 65 available seats. On the port side, one officer had to insist on women and children only onto the lifeboats. Officer Murdoch, who was on the starboard side at this time, was having trouble persuading people to get into the boats.

Many people, as it turned out, were holding on to the belief that the Titanic was safer than the little boats. And many elderly folks had to be lifted into the boats against their wishes.

The class system
The third-class passengers were the last to hear about the collision. Some of them only realized what was going on when their cabins got flooded. Within an hour, 25 tons of water filled the ship. Chaos erupted. The band kept playing to boost the morale of those who were destined to die. At around 1:30 a.m., the bow was already deep in water, and people could hardly stand upright, the deck so steeply inclined. 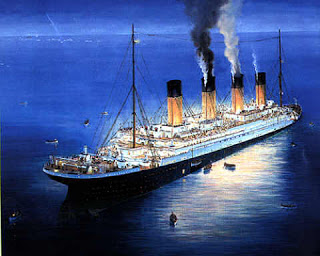 At around 1:55 a.m., the richest man on the ship, John Jacob Astor, took his pregnant wife to a lifeboat and pleaded with the officer to allow him to join her. But the officer stood his ground – women and children only.

At 2:15 a.m., the water had reached the level of the first funnel. The lights on board flickered and then went out. Rumbling noises ensued. The stern tilted up to a 45-degree angle, and the ship split apart down the middle. The larger part reared up by 75 meters and then bow first, went down, negating notions that the Titanic was unsinkable.

The tale of the departing lifeboats
Despite the lifeboats not being filled to capacity, they rowed away from those crying for help. They feared that if too many people tried to climb aboard, the boats would capsize. Only one boat turned around and picked up five people from the water. Two of whom, unfortunately, died after being rescued.

The people in the lifeboats weren’t out of the woods themselves. Some were wounded, others inadequately clothed and in grave danger of dying from the extreme cold. The ocean liner nearest the Titanic was the steamer Carpathia, which took four hours to reach the RMS Titanic despite orders of working it up full speed. Between 4:14 a.m. and 8:30 a.m., 315 women, 52 children and 126 men were taken on board.

It was believed that a total of 1,517 people died when the Titanic sank.