You are here: Home / Social Awareness / LBC and JRS Volunteer To Ship Donations For Free

Shortly before this post, at This Christmas, I Wish PAGIBIG Would Send Bills On Time, I said the upcoming post will be about tonsillopharyngitis. But here’s what I came up with – a different topic altogether. No worries though, the tonsillopharyngitis discussion is already on park, and I am going to get back to it later, I promise.

And I’ll bet my bottom dollar, er, peso, that by the time you’re through browsing this post, you’ll agree with me that this is indeed supposed to come before any other topic.

For the whole of this week, nothing was more seen in the news than the devastation Tropical Storm Sendong had left behind. Not even North Korean leader Kim Jong Il’s death could steal the public eye, the Philippine public eye, at least. 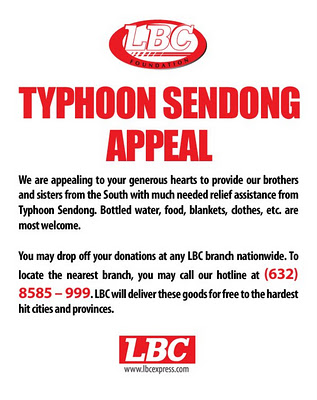 Drop off your donations at any LBC branch nationwide.

Not that we don’t sympathize with the North Korean people for their loss, but there is far greater loss among the people of Cagayan De Oro City, Dumaguete, Iligan and neighboring provinces.

Death toll as of this writing had reached more than a thousand, and damage to property is estimated to reach more than 1 billion pesos.

For the people who lost their loved ones, their source of livelihood, their properties, I can only extend my heartfelt sympathy.

Two years ago, my family and I went through the same. It was September of 2009 when Typhoon Ondoy unleashed its wrath in Metro Manila. I can only be thankful that unlike most of the people who bore witness to Sendong’s fury, we had the chance to evacuate, hence, sparing our lives.

Still, some others weren’t too fortunate.

A good friend and former colleague of mine had decided to relocate to Dumaguete City, his hometown, a couple of years back. As far as we were all concerned, he was better off in Dumaguete. In Manila, he lived alone, save for his housemates at an apartment he rented in Mandaluyong.

Aside from being reunited with his loved ones, he got himself the job he wanted, with the pay grade he deserved, him being one of the most patient and level-headed people I had the fortune to meet.

The moment I heard Sendong had wreaked havoc in his hometown, too, worry for his safety was foremost in my mind. Facebook messages from old co-workers and friends confirmed that he and his family, indeed, had lost their properties. Thankfully, everyone in his household survived to tell the tale.

Send your donations through any JRS branch nationwide for free delivery.

These cities Sendong hit when it slammed ashore were rarely visited by storms, hence, the unpreparedness. According to a report filed by GMA 7, advisories by the national government to consider pre-emptive evacuation, especially of coastal communities, had not been heeded.

Then again, after all is said and done, it remains that the events of the last few days had happened and the aftermath something to be dealt with. People need help. The blaming, analyzing, finger-pointing, scapegoating can happen at a later time.

But for now, if you wish to help those who need it most, LBC and JRS Express are willing to ship your donations of food, bottled water, blankets, clothes, et cetera for free.

What more fitting way to spread the love this Christmas, you reckon? To LBC and JRS Express, mabuhay! We salute you, guys!