You are here: Home / Home and Health / My Typhoon Ondoy Story

Two years had come and gone since the wrath of typhoon Ondoy was witnessed and felt by the Greater Manila Area, most especially Marikina, Cainta, Pasig and the surrounding cities.

My family and I were residing in Pasig when this all happened.

I was on vacation leave the day before the tragedy struck, to prepare for my children’s school field trip the following day.

The morning of the flood
Even through the rains, we went to the supermarket that night to buy stuff, and because I knew there was much to be done to ensure that the activity was something my kids would remember, I was awake before 4 a.m. on that momentous day of September 26, 2009. 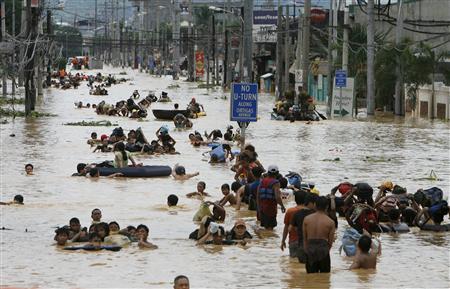 The rain had poured steadily the whole night, and it was still raining when I woke up. Shortly afterwards, the phone rang and somebody from school informed me that the field trip had been canceled due to the bad weather.

So there I was, not knowing whether to be thankful or annoyed. When the kids got out of bed, I told them of the canceled trip and asked them to all go back to sleep. Protests here and there ensued. After a while though, they relented and went back to their rooms.

The scramble to move things to safety
A few hours more later, the rain was still not stopping. Flood in the garage was already ankle-deep, and then into the living room. The adults in the household – myself, my husband, my parents-in-law and our helper – were all scrambling to move things here and there to avoid damage.

But that proved futile because the water went up so fast that the next thing I knew, our bedrooms were all flooded as well.

As our house didn’t have any upper floors, through the kind invitation of a neighbor whose house fortunately had three floors, my husband moved the kids next door one by one. By this time, the flood outside was already waist-deep with no signs of abating.

Trapped!
Since I still had to look for important documents and other valuables we couldn’t afford to get damaged by the flood, I was the last to leave the house. And this only happened after the water had risen well above my five feet five inches that I had to stand on top of a washing machine, which was already standing atop a bench.

However, despite the bench and washing machine supporting me, I was still submerged in stinking floodwater up to above my waist.

Swimming is a survival skill
I didn’t know how to swim. All along, my husband had been begging me to brave the floods and leave the house with him. If that happened, my saving grace would have been an empty mineral water container.

But I couldn’t do what he was asking no matter how much he pleaded. I kept telling him the container wasn’t enough to support my weight, and because I was too scared to even think about it, it was possible we might both drown the moment I had a panic attack.

He went out of the house and cried for help. It was one of those times I prayed really hard. I prayed that if God wanted me to die right there that He forgave my sins and made sure my children were well-cared for even after I was gone.

Is it time?
But then again, despite all that was happening, somehow, I knew it wasn’t the end of me yet. I probably have read half a library – or maybe not – in my entire existence, and almost always, people in the brink of death all somehow had to undergo some type of a time capsule experience where everything that happened in their lives flashed back to them, like scenes in a movie.

I was waiting for that to happen, but it never came.

Minutes later, my husband was back. Thankfully, another neighbor lent him a salbabida – a life buoy – which made my spirits soar. Although it was difficult because the gap between our front door and the water level was just a little over a foot, we succeeded in getting out, safe and sound.

Under the mercy of kind neighbors
For several nights, we were forced to while the time away in our neighbor’s attic in borrowed clothes, a few pillows, no beddings, just myself and my family, safe from the calamity outside. For food, my husband would swim his way to a store a few blocks away.

We mostly ate sardines, instant noodles and bread which were probably nearing their expiration date.

But as they say, beggars can’t be choosers.

After the flood
When the flood finally subsided, our house was a total mess – broken cabinets, dirty clothes, mud all over the place, mayhem everywhere. A telltale sign that the water level had reached a few inches short of the ceiling at its highest was a CD case that managed to get plastered to the wall.

Nonetheless, I still have a lot to be thankful for because we only lost things that could be easily replaced.