You are here: Home / Home and Health / Think Green: 6 Things You Didn’t Know About Recycling at Home

Recycling at home is a great way to help the environment and generate extra cash. 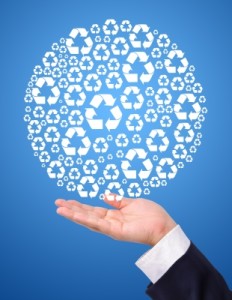 While most municipal recycling programs will pick up glass, paper, plastic, and metals, there are a number of other items that can be recycled in exchange for cash or a tax deduction.

Each year, about 2.5 million pounds of e-waste is disposed of. Renewable resources created from old cellphones, computers and other electronic devices are fast becoming one of the most sought-after categories of waste by entrepreneurs.

E-waste recycling programs take in computers, cellphones, and other electronics. Local specialty stores or recycling facilities usually advertise if they recycle e-waste. Some technotrash programs operate through the mail by requesting a recycling box for shipping.

General trash not designated under the classification of standard recycled items is sought by nonprofit organizations for fundraising. Nonprofits that pay for donor shipments of dry goods trash turn waste into cash for philanthropic donation to school programs and other deserving recipients.

For donation of wearable clothing not considered to have a resale value, the Goodwill or other outlet set up to sell used clothing in a thrift shop environment to the benefit nonprofit recipients such as animal boarding or shelter facilities, take clothes in exchange for tax deduction credit.

If the shoe still fits, spare it. Exchange used athletic shoes at the Nike Reuse-a-Shoe program. The Nike Company turns old athletic shoes into playground and recreation flooring. The international exchange of athletic shoes is One World Running’s mission. The organization takes in and ships still-wearable athletic shoes to athletes in Africa, Haiti, and Latin America.

You shouldn’t typically throw your cooking oil down the drain anyway, as this can clog pipes. So a better way to get rid of it would be to recycle. Biodiesel firms pay for used cooking oil at prices ranging from 33 cents to 66 cents per gallon.

You might not think to do anything but throw your hair in the trash. Human hair can be recycled to make wigs, however. Rates for unbleached, natural hair range from $200 to more than $1,500. Check the web or yellow pages for hair buyers.

Kara Masterson is a freelance writer from West Jordan, Utah. She graduated from the University of Utah and enjoys writing and spending time with her dog, Max.