Don’t let negativity given to you by the world disempower you. Instead, give to yourself that which empowers you. – Les Brown

Barbara Stanny, daughter of “R” in H&R Block, grew up relying on her father, then her husband to manage her money. But a personal crisis forced her to wake up and look at her relationship with money in a way she had never done before. 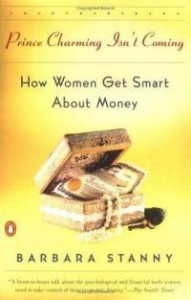 In her book, Prince Charming Isn’t Coming (How Women Get Smart About Money), she tackles what, in her interviews with money-savvy women, she believes is the underlying factor why most women, who may be good at saving and budgeting, are prevented from financial mastery.

What society believes in
All over the world, society and tradition had groomed women to rely on men for financial security. This isn’t so bad an ideology for women to pursue if situations remain constant, meaning:

As we all are aware, times had changed, sooner than we probably have realized. But this belief had somehow remained.

Men and women are the same. We all crave to be loved and cared for. A lot of women hold the subject of managing their own finances at arms’ length because of society’s perception that women who are money-smart are strong, can take care of themselves and okay to be left alone.

And this is what holds a lot of women back.

The “prince” would more often than not rescue the “damsel in distress” before the other woman who is believed to probably have the same strength as he does.

What you may be doing wrong
And if you’re a woman still waiting for the realization of this dream of a Prince Charming – yes, the “prince” who will offer you financial security at your feet – you might actually be waiting in vain. Because really, financial mastery is not something some other person will do for you, but something you alone can do for yourself.

Here are some of the lines I particularly love about the book: