You are here: Home / Home and Health / Conversations with an Eight-Year Old: Racing

I’ve been manning the graveyard shift for sometime now that even during my off days, I normally am awake at night and asleep during the day. Last night, however, I managed to sleep at 10 p.m.

But at about 2 a.m., I woke up to distant clapping. My husband was awakened, too. And when I asked if he knew what was going on, he said some kids were probably drag racing on the virtually empty McArthur Highway.

The racing eight-year old
A few months back, my eight-year old son was challenged to a bike racing contest by one of his playmates, something he said he reluctantly agreed to, but agreed to all the same.

As it turned out, the race went on fine for the first few minutes, but soon afterwards, my son was going so fast that he lost control of his bicycle and ended up sprawled on the concrete pavement, with the right side of his face taking the brunt of the fall. I wasn’t there to witness the event, neither was my husband.

Several well-meaning high school students who witnessed the mishap helped him to his feet and accompanied him home.

Lesson learned
My husband confirmed that all the while this was happening, our son wasn’t crying much, very much unlike the crying marathon he would engage in whenever his sister or Kurt teased him.

Just so he knew he wasn’t cute whenever he did that, I recorded one crying session for him to listen to, much to his chagrin. Father and son worked on the wounds, which, thankfully, were superficial. But since they were concentrated on the face, it would seem like my son had been in a terrible accident. 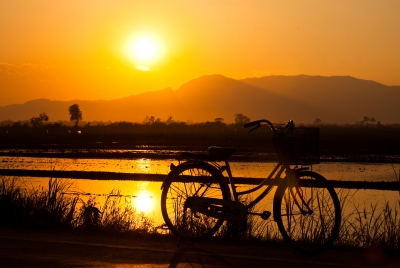 If I were around that time, I would have rushed him to the hospital and probably would forbid him from going to school the following day.

But I wasn’t there, and my husband, being a person who rarely got sick and who would first and foremost take a stab at at-home medications before going to a doctor, dressed his wounds, gave him an earful, helped him with his homework and took him to school the following day, like it was just any other day.

Lesson reinforced
Come the weekend, the moment I got beyond the door, my eyes were like laser beams focused on finding him. He was nowhere to be found. A few minutes later, I located him, cowering behind the sofa. When I saw his face, I almost went into a litany that could potentially make his eardrums bleed.

And then I remembered. The fact that he didn’t meet me at the door, like he always did whenever I came home, and instead gave me a hard time finding him was testament to the fact that he already knew what was coming.

Not wanting to add insult to injury, I inspected his wounds and asked if they hurt. He said they did, a little. And then I asked him to relate what happened, even if I already knew.

“My classmate challenged me to a bike race, and I agreed.”

“Do you think you did the right thing?”

He shook his head.

“Because he wouldn’t stop until I agreed.”

Kids, indeed! “What happened to the bike? Did it malfunction or something?”

“I probably was going too fast that it wiggled and wiggled like crazy and I couldn’t stop it anymore.”

Thank goodness that was all that happened. “Will you go bike racing again?”

“Not anymore,” was the resolute reply.

“Good. Otherwise, I will take your bike away and give it to someone else. Have you seen yourself in the mirror?”

“Why don’t you take a look again?” This I did just so the gravity of his error would sink in the deepest.

He shook his head in earnest.

Suppressed giggles erupted from somewhere. When I turned to look, there were Kurt and my daughter trying to contain their laughter. My eight-year old then cried like tomorrow was Judgment Day.

One week later, his abrasions were completely healed. As of this writing, he still had not taken on any bike racing challenge.