I was scouring the internet for news when I stumbled upon this inspiring and heartwarming story of a nine-year-old boy who built his own arcade using cardboard boxes.

The film was directed by Nirvan Mullick, an L.A. filmmaker, who chanced upon Caine’s Arcade when he went on to purchase a car handle from Caine’s father’s auto parts shop. The film went viral and got a total of 3.5 million views on YouTube and Vimeo in a matter of four days. 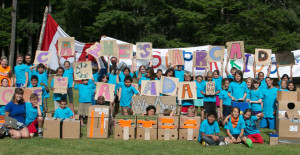 Lots and lots of online articles ensued, leading to TV stories about the precocious boy and his cardboard arcade by CNN, NBC and Fox.

Mullick set up a scholarship fund for Caine, which by now totals more than $140,000 in online donations. TMZ also reported that Caine’s ingenuity made such an impression on a pinball machine store owner that she so willingly gave him a pinball machine for free.

The pinball machine is worth thousands of dollars.

Watch the video and be inspired. Don’t forget to keep a box of tissues handy. Well, just in case.